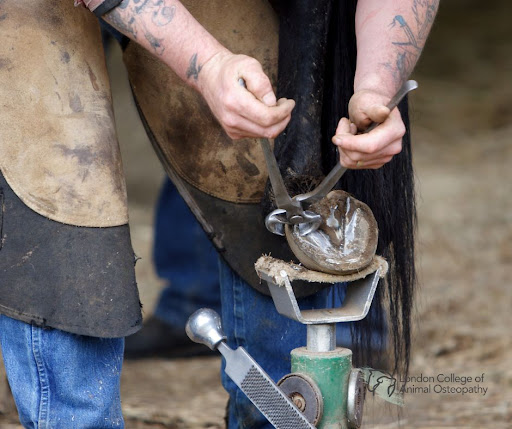 By Chris Bates, DO, Equine Therapist and Lecturer at London College of Animal Osteopathy (LCAO)

There is a lot of talk in the equine industry about hoof care and the benefits of barefoot trimming. Many top riders are now competing at the very top levels of equine sport with barefoot horses.

Through an Osteopathic lens, barefoot trimming makes a lot of sense. Adding an artificial object to the body will inevitably alter the natural function. Proprioception (perception of the position and movement of the body) will be changed every time a new set of shoes is fitted.

While the hoof is a relatively hard structure and designed to carry immense forces, it still contains incredibly complex structures for feeling the world around the horse.

Osteopathy recognizes the body as a dynamic and changing phenomenon, one that alters and adjusts in relation to the forces placed upon it. Fundamentally changing those forces by the addition of shoes will of course fundamentally change the biomechanics and the function of the body above them.

As we say in Osteopathy, “Structure and Function are reciprocally interrelated”. The hoof’s function as a vascular pump plays an important role in maintaining health of the tissues in the distal limbs.

The compression and release of pressure when moving aids in the venous return of blood and the lymphatic drainage of the limb. Structures like the lateral cartilages aid the fluid dynamics of the extremities (see our courses for details on anatomy).

From the early pioneers of Osteopathy to modern practitioners, the importance of adequate arterial flow has been promoted greatly, as has the drainage and the removal of obstructions to that flow.

In my career, I have noticed a marked difference in the hoof health of horses who have their natural fluid dynamics uninterrupted. One case springs to mind of a TB x Gelding I had been treating for almost a year when the owners decided to try going barefoot.

My recommendations had simply been to get a second opinion on his feet as there were a number of issues. The farrier had been shoeing the other horses at the same stables and so these owners used him for convenience.

The gelding had a history of reduced stride length and roaching of the back when ridden or when trotting on the lunge. His canter was often disunited and lacked any lateral bend, in fact, the canter often broke to a trot and was downhill.

His feet were long, leaving the hoof pastern axis broken and placing excess strain onto the suspensory apparatus and tendons. The heels were contracted and there was no contact between the frog and the ground.

Unsurprisingly, the horse’s hooves were dry, cracked and he was often dropping shoes in the field. There had been a history of mild lameness in the summer months that I had assumed was due to the increase in forces due to harder ground.

The owners were so often slapping lotions and oils onto the hoof wall to avoid cracks and dehydration that they were quite the experts in what was available. In my role as a therapist, I am not at liberty to dictate shod or barefoot, I can make recommendations and explain the reasons but unfortunately, it ends there.

I made every effort to educate the owners on how the hoof formation was likely leading to many of the horse’s issues (often being listened to intently by other owners at the stables). This is where a practitioner who is both Barefoot Trimmer and Animal Osteopath would be placed to make huge positive changes in the animal’s wellbeing.

After much coercion, I managed to get a colleague of mine (Barefoot specialist) to come to the stables and give a talk. This talk really did the trick and I attended to give my thoughts too.

The owners of the TB X in question made the switch. As with any horse, the changes were gradual and monitored frequently while the trimmer helped the horse transition.

Every time I attended to treat the horse from that point, I saw the forelimbs standing more plum, shoulder development increased, lateral bend improved and hoof health was great.

His hooves were no longer needing oils and gels and were crack free. The horse went on to reach a good standard in novice dressage and the owners are happier than ever.

So, if Barefoot Trimmers can make such great changes, why train in Osteopathy too?

Well, if every condition and issue stemmed only from a primary condition in the feet, then we wouldn’t need any therapists.

Unfortunately, trimmers will come across horses that have a descending chain of impacts that could stem from spinal restrictions, muscular strain, systemic health concerns, or acute injuries.

Osteopaths have discussed the importance of “Primary Lesions” for many years. The reality in clinical practice is that patients want to feel better and if that requires coming at a problem from more than one angle at once then so be it.

In my own practice I can address different angles as I am a human Osteopath too, this means that if there is a riding issue that is being caused by the rider, I can address the stresses on both rider and horse.

Being that hoof health is paramount to horses’ wellbeing, having the ability to address the body as a whole including the adjusting of hoof health and mechanics is a powerful combination.

Ultimately there will be horses who require remedial shoeing and this is always going to be important. Osteopathy as a discipline is most concerned with patients as individuals and so would never suggest that all horses can or should be barefoot all the time.

Osteopathy also values the body’s own ability to accommodate stressors and allostatic load and seeks to provide the best environment for it to do this. The wider the scope of the practitioner, the more avenues for providing this favorable environment there are.

The Classical Osteopaths would say that although conditions may be unpleasant, they are never wrong; the body’s state is a result of the intrinsic and external factors and can only be optimized by removal of obstruction or perversion of natural structure and processes.

Using the Osteopathic mindset “why is this condition correct?” really changes animal health and aims to address the “state” of the animal rather than palliate symptoms. These values are shown in the principles of Barefoot Trimming too.

For information on how you can become an Equine Osteopath, click here 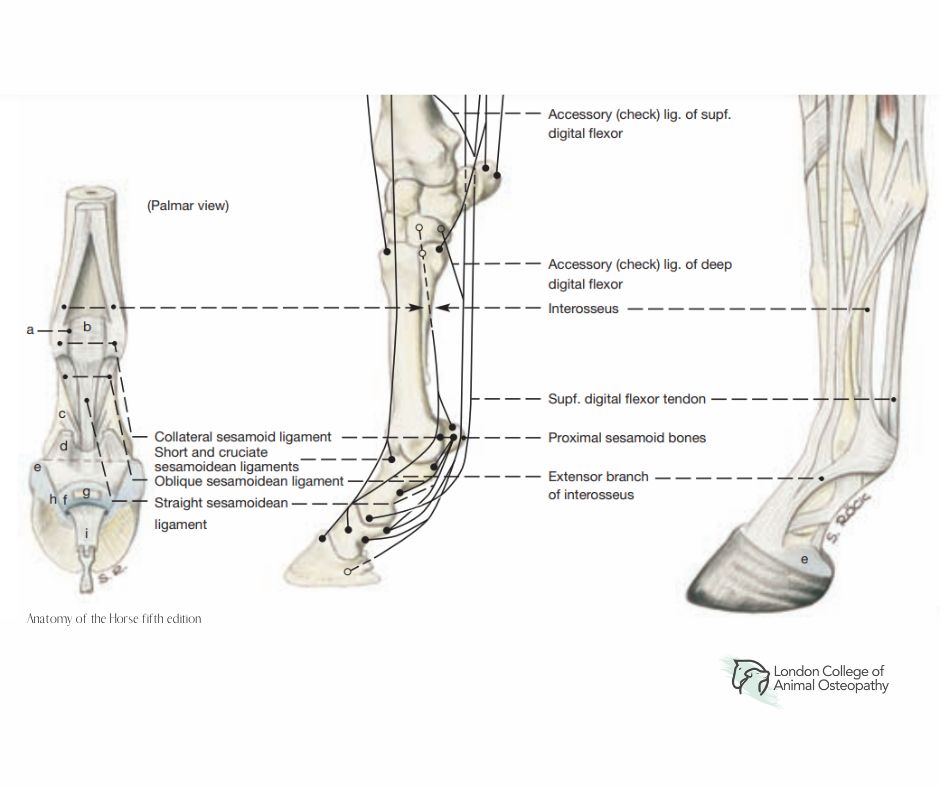